Iceland Foods Charitable Foundation (IFCF) has continued its long-established commitment to beating dementia with the selection of Alzheimer’s Research UK (ARUK) as its charity partner for 2019, with a commitment to donate £1m to ARUK during the year.

The two organisations will work together in a partnership that will fund research to help in the search for a cure for dementia, while also raising much-needed awareness of the cause.

As part of this partnership, Iceland stores will take part in a fun-filled charity fundraising week from 8 June 2019, when colleagues and customers will be able to show their support for ARUK through a variety of in-store activities.

This is the second time ARUK has partnered with Iceland, which previously supported the charity’s pioneering research programmes between 2011 and 2013. Since 2010, Iceland has raised a total of £15 million for ARUK and other dementia charities. 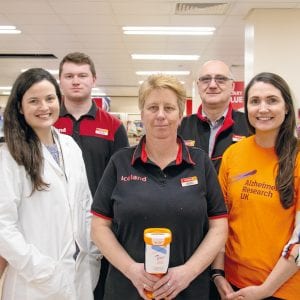 There are almost one million people living with dementia in the UK, and it has become the leading cause of death in the country, yet there are currently no ways to slow, stop or prevent the diseases like Alzheimer’s that cause it. ARUK’s vision is a world free from the fear, harm and heartbreak of dementia and the charity is doing this by funding world-class research to better understand, diagnose, treat and reduce the risk of dementia. ARUK is also focused on transforming the way the public thinks about dementia through hard-hitting awareness campaigns.

“We desperately need to tackle the devastating impact that dementia is having on our society. Our £1m commitment to the UK’s leading dementia research charity will hopefully lead us closer to the crucial scientific breakthroughs that will result in more treatments and ultimately a cure.”